The C-Roads Austria pilot was built on the core elements of the European C-ITS Corridor project in Austria (“ECo-AT”), as defined in the Austrian C-ITS Strategy. Since 2016, a pilot area (“ECo-AT Living Lab”) around Vienna - based on ECo-AT specifications - had been operational and open for stakeholders in various test cycles and cross border tests.

It was Austria’s intention to replace the ECo-AT Living Lab with an operational C-ITS system within C-Roads Austria, and thus, a large tender for the national rollout of a fully “hybrid” C-ITS roadside system on the whole Austrian motorway network as issued, including several hundred roadside stations and various Day-1 and future Day-2 use cases from the C-Roads catalogue. “Hybrid” means: short-range ITS-G5 and long-range cellular communication (based on harmonized C-Roads specifications) coexist to deliver the same content over different media. This tender started end of 2018, with the intention to have the first elements of this operational system, including a first batch of roadside stations, available 2019 – just in time for planned C-Roads testing activities in 2020.

With the Delegated Regulation on C-ITS not materializing in 2019, the tender was put on hold to reassess the situation. After the formation of the “C-ITS Deployment Group” and its successful statement on continued deployment in late 2019, the Austrian ministry of transport and ASFINAG decided to continue with the tender on a new time frame – with the operational system and the first batch of roadside stations now available until the end of 2021. This meant, however, that for mandatory C-Roads testing in 2020, additional efforts had to be made to update roadside units from the pre-existing ECo-AT Living Lab to the current level of C-Roads specifications and to have roadworks trailers equipped with C-ITS communication. A contract for dedicated pilot installations was awarded in late 2019, with 25 ITS-G5 roadside stations around Vienna, Graz and Linz available for testing in 2020. In the same year, a framework contract for multifunctional roadworks trailers including ITS-G5 was established, from which 15 units were available for testing in 2020.

Due to COVID-19 and resulting travel restrictions, C-Roads testing activities came to a hold in early 2020. In autumn, in between lockdowns, Austria was able to perform a small, but successful C-Roads Cross-test in October of 2020 on the A1 near Linz, with special COVID-19 precautions in place and support limited to virtual meetings. With the COVID-19 situation worsening after that and a second lockdown in place, Austria asked for an extension of C-Roads Austria until the end of 2021 to enable proper testing and accomplish the C-Roads milestones.

As a result, the pilot – planned to be only available for 2020 – was extended until Q2 of 2021. The tender for national roadside C-ITS deployment was concluded in October 2020 and a framework contract was awarded to Siemens Mobility Austria. Out of that framework, an initial contract for the delivery of the central C-ITS station and 175 ITS-G5 roadside stations was obtained, including service and operation for up to 12 years. These first 175 roadside stations will be placed on the motorways around Vienna, the “west corridor” from Vienna to Linz to Salzburg (as part of the co-operative C-ITS corridor from Rotterdam via Frankfurt to Vienna), around Graz and on several border regions, to facilitate easier cross-border testing. According to the schedule, these roadside stations should be deployed and operational until the end of 2021 in several waves.

First elements of that deployment will gradually supplant the pilot installations from Q2 / 2021 onwards and be available for further C-Roads test activities.

In addition to the roadside deployment of C-ITS, Austria also decided to equip ASFINAG’s road operator (amber/blue light) vehicles with C-ITS vehicle units, based on the available use cases for such vehicles in the C-Roads catalogue. A contract to equip 100 vehicles was awarded in late 2020 to Kapsch TrafficCom AG out of an existing framework tender, with the aim to have a first batch of vehicles ready and equipped until the end of 2021.

From 2022 onwards, the operational deployment of C-ITS in Austria at roadside, in vehicles and by using trailers will continue in C-Roads Austria 2. The roadside framework contract allows for the deployment of up to 525 roadside stations on Austria’s motorway network. Given an overall network length of around 2250 kilometers, the average distance between to stations would be less than 4 kilometers – with a typical communication radius of 1.5 to 2 kilometers for ITS-G5, this nearly accumulates to area-wide coverage of the whole network.

The Austrian C-Roads pilot site covers the most important motorway sections from Vienna to Salzburg, including the Linz area, as well as from Vienna to Graz and the A12 and A13 motorway sections around Innsbruck in western Austria. Moreover, the test site will be set up in the cities of Graz, Salzburg and Vienna. In this way, C-Roads Austria comprises road network elements of three different TEN-T corridors, namely Baltic-Adriatic, Rhine-Danube and Scandinavian-Mediterranean.

The Austria C-Roads pilot site became operational in 2019 with 28 roads side stations covering in total 300km of Austrian motorway. From 2019 on, 300km of the Austrian pilot sites were fully operational with connections between TMC and the central C-ITS-stations and the service distribution to all C-ITS stations. The operational deployment will start in 2021 and is planned to cover the same area with up to 175 Roadside stations installed on the network.

Starting in 2018, first cross-site tests were carried out with the first two C-Roads pilot locations and will be followed by cross-site tests, also including the urban pilots, in 2021.

For the urban pilots the installation of Roadside units is planned for 2019/2020 and cross-testing shall happen in 2021 to gather experiences with urban C-ITS implementations.

Details concerning the pilots is documented in this Milestone Report. 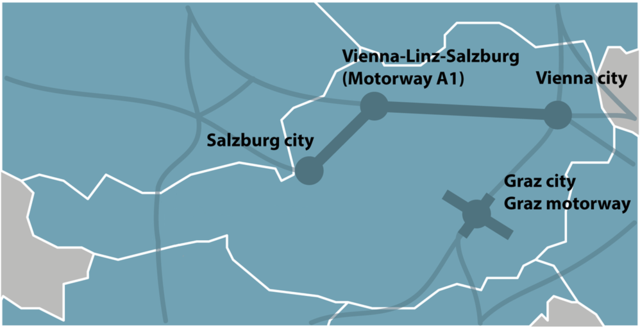