Being a part of Intelligent Transport Systems, cooperative ITS (C-ITS or cooperative systems) encompass a group of technologies and applications that allow effective data exchange through wireless communication technologies between components and actors of the transport system, very often between vehicles (vehicle-to-vehicle or V2V) or between vehicles and infrastructure (vehicle-to-infrastructure or V2I).

The deployment of C-ITS is an evolutionary process that will start with the less complex use cases. These are referred to as “Day-1-services”, encompassing messages about traffic jams, hazardous locations, road-works and slow or stationary vehicles, as well as weather information and speed advice to harmonise traffic. Using probe vehicle and infrastructure-related data, all C-ITS services shall be transmitted directly into the vehicles in a way that allows users to get informed, but not distracted.

The deployment of C-ITS faces many important issues still unresolved, such as legal, organisational, administrative, governing aspects, technical and standardisation issues as well as implementation and procurement issues.

The C-Roads Platform is a cooperation of Member States and road operators working on the deployment of harmonised and interoperable C-ITS services in Europe. the participation Members are committed to the Terms of Reference.

The C-Roads Platform approach will pursue cooperation on a holistic level in order to cover all dimensions linked with the deployment of C-ITS, such as sharing experiences and knowledge regarding deployment and implementation issues, as well as user acceptance. It as well follows a bottom-up approach that will include national pilots. These will form basic elements for a later pan-European C-ITS implementation. The national pilot initiatives will move on to cross-site testing, which will allow them to grow together and achieve transnational interoperability. In this way C-Roads will ensure European cohesion of C-ITS deployment in the European Union with regards to a long-term roll-out.

Harmonisation is the core asset of the C-Roads Platform, since it ensures sustainable and efficient deployment. Consequently, all partners share the vision of the main objectives, layed down in the Terms of Reference, which are - beside harmonisation - (pilot) implementation, demonstrations of C-ITS deployment and advance to large-scale deployment. 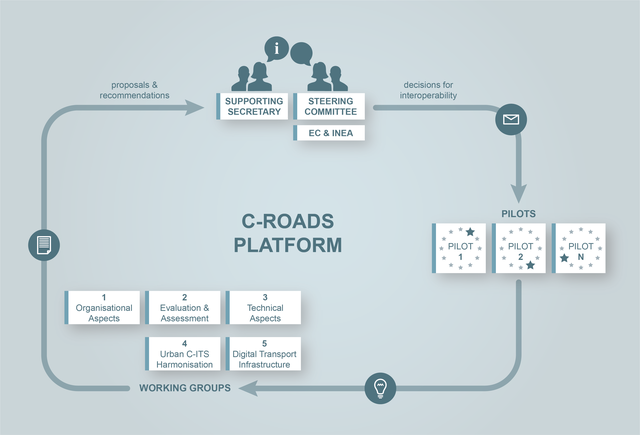