Czech Republic is one of the founding members of the European C-Roads Platform thanks to its prior experience with the implementation of C-ITS technology. It is specific for the C-Roads Czech Republic project that it does not target only on motorways but also on cities, public transport and railway level crossings. The cities of Brno, Ostrava and Pilsen are among the first European cities where C-ITS has been fully implemented. In the same way, first trams and first railway level crossing signalling systems in Europe were equipped with C-ITS technology as part of the Czech C-Roads pilot.

Implemented C-ITS services provide warning messages to drivers about road works, slow and stationary vehicles and hazardous locations or approaching emergency vehicle thus driver can adapt the driving. The Road Works Warning service can also protect the road workers through messages that inform drivers about a work site ahead therefore drivers can drive cautiously along the location. National field tests were carried out and verified the functionality in March 2020.

The Brno urban road operator has managed to bring together several public & private stakeholders to form a complex C-ITS system which is already being utilized by the public transport vehicles, vehicles of Fire Rescue Services, as well as the urban road operator itself. The deployment was particularly challenging since C-ITS & traffic light technologies of multiple manufacturers were involved, however it has been proven that even so many different actors can create functional and fully interoperable cooperative ITS system.

The cities of Ostrava and Pilsen as pioneers in implementation of C-ITS to public transport vehicles had to find a way on how to get the C-ITS onboard units to trams and trolleybuses which are under special railway regulation. Most of the C-ITS devices on the market did not meet the requirements of such regulations therefore special terms had to be negotiated with the Railway Administration. It is necessary in the future to demand fulfilling these requirements from the C-ITS equipment manufacturers.

The decision to build a fully hybrid system (using two transmission technologies - ITS G5 and mobile operator networks on LTE technology) led us to a unique open architecture of the entire system covered by a dedicated integration platform, which is ready to connect different service providers. This architecture is thus a forerunner of the future European architecture connecting national implementations.

In addition to this architectural success, we have managed to competently address the issue of personal data protection, which is a necessity for the system to be credible for its users. Later European working group confirmed problem that current legislation on personal data protection makes it virtually impossible to build open C-ITS system. The output of the project is a recommendation for the establishment of an international group of experts who will suggest future changes in legislation to allow new transport solutions.

C-ITS was successfully deployed and has been ready for testing since spring 2020. The cross border testing was coordinated with C-Roads partners and OEMs. Participants in tests were registered in advance so they could get detailed organizational and technical information and additional support. Unfornatelly, given the situation with COVID-19 pandemic the testing event was postponed to the spring 2021.

As described above, in cities like Brno C-ITS is already being utilized by real users. The C- Roads Czech Republic project has aroused the interest of other Czech cities which are now willing to follow the success stories of Brno, Ostrava and Pilsen. Also, the national Road Administration plans to further develop and extend its C-ITS system in order to provide continuos and top-quality services for even more vehicles travelling on its roads. It is the aim of the Czech authorities to further support this interest and to spread C-ITS across the country so that every Czech road user can benefit from the work started by the C-Roads project.

The services will be implemented by Individual C-Roads Czech Republic project partners:

Implementation of C-ITS services via ITS G5

Evaluation and Assessment of implemented systems: 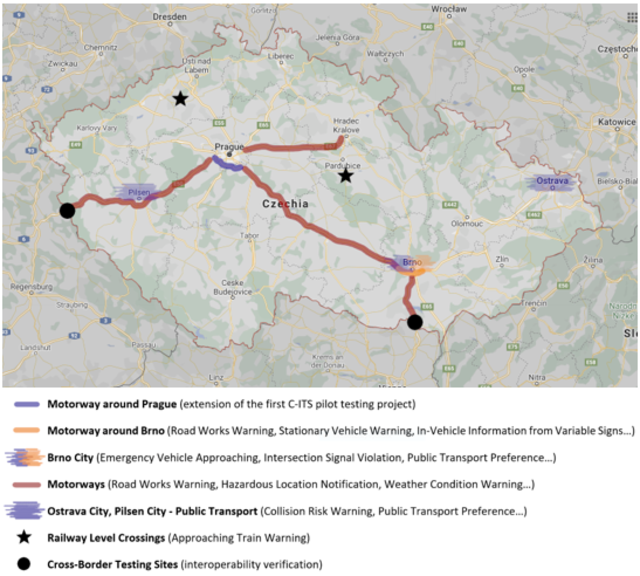