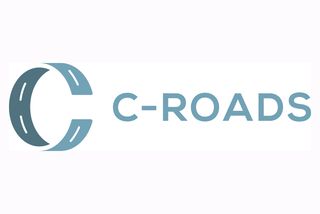 In Hungary, C-ITS deployment started back in 2015. A 136-km-long stretch of the M1 motorway between Austria and Budapest was selected for C-ITS services pilot deployment. The focus of the trial was on the improvement of road safety – especially in work zones – therefore maintenance vehicles, mobile RSUs were also installed, which can operate in stand-alone mode as well. In the framework of C-Roads, Hungarian Public Roads company has carried out an upgradement, and extension of the 2015 pilot in terms of coverage, and functionality. Additional Day-1 use cases were introduced with the capability of hybrid communication, along motorway M1 (towards Austria), and motorway M7 (towards Croatia, and Slovenia). Besides core network corridors, special attention was given for urban applications, too. In the town of Győr traffic light controllers were improved to provide TTG/GLOSA information in 10 neghboring junctions along the main traffic route, where Intersection safety services are available, too. The pilot sites are operational since February 2021.

Hungary has already signed the grant agreement of C-Roads 2 Hungary, too, as continuation of the ongoing phase. The planned Hungarian work programme devotes particular attention to the creation of the urban test environment for the autonomous and connected vehicles in the town of Zalaegerszeg linked to the Automotive Proving Ground Zala (APZ), building on the experiences of the pilot project in the city of Győr. The deployment will focus on Day-1 and Day-1.5-C-ITS-services with option to be up scaled to Day-2-C-ITS-services. The so called ZalaZone is the greater area of the town, including the test track, that will be ready for autonomous vehicle testing, but the plans are even more ambitious. With a trilateral multi-level cooperation, Austria Slovenia, and Hungary plans to implement cross-border test routes. C-Roads 2 Hungary will boost this effort by implementing C-ITS services in the greater city area, and TEN-T corridors (with domestic, and cross-border sections).

With the extension, major part of motorway M7 (Mediterranean corridor) will be covered, and urban deployment will be carried out in the city of Győr by motorway M1 (Orient-East Med corridor). In order to improve coverage and ensure continuity of service, new transceivers and other devices will be implemented on motorway M1 Győr bypass section at the same time. This Győr bypass section is part of the existing 136-km-long M1 pilot section, motorway M1 between km 105-130. In the C-Roads Hungary project we are focusing on motorways M1, M7 and urban pilot in the city of Győr by motorway M1.

Partners planned to be involved:

C-ITS services will be tested with limited number of dedicated cars and interested car producer representatives will be invited for common testing of their C-ITS systems what we will include in the test reports. At least 20 vehicles will be involved in the testing. At least 10 devices will be used for internal testing and we provide at least 10 devices to our partners for external testing (eg. University). Partners from C-Roads Platform will also be invited to test the interoperability.

The test will be running from the second half of 2018 till the end of 2020. During that time we are collecting the data continuously from the test devices. A minimum of two different types of equipment will be used for testing in the public procurement process to ensure the interoperability. Expected indicators for pilot extension in Hungary:

Declared output of C-Roads Hungary Pilot is the delivery of extended and tested C-ITS Day-1 service related to motorways and urban areas as well. Besides ITS-G5, cellular communication shall also be implemented and tested for interoperability with the assessment report.

Results will also be presented at various national or international meetings, workshops and conferences. Dissemination activities will be carried out via web portal, social media and C-Roads Hungary Road Show, one for general public and one for ITS stakeholders, together with our dissemination partner ITS Hungary Association. 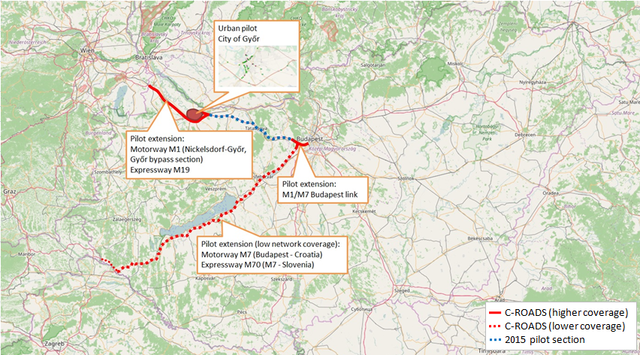