Cooperative Streets is aiming at fulfilling the following policy goals in road safety: reducing accidents and incidents; cohesion: bringing to the arena major urban areas along the core network; decarbonisation: promoting public transport use added value for citizens: mobility as a service solutions.

The evolution of connected mobility towards urban and metropolitan areas will be accompanied by the necessary involvement of the National Access Point (NAP) and its governance structure. The NAP is a key feature for the entire process, and requires development into a central and transversal system that guarantees a data-sharing interoperable, seamless, functional, reliable and permanent communication tool.

The key objective of the Cooperative Streets project is to establish a pilot case for the evolution of the NAP, developing the necessary architecture, governance model and standards that will allow for integration of the different mobility systems and all the necessary stakeholders. The goals for an extended NAP are therefore common to all the Cooperative Streets pilot cases and represent a bridging activity for this project.

To deliver on the overall objective of the Action, there are 5 specific pilots.

Together these macro pilot applications correspond to 60 pilot activities which will demonstrate the potential of C-ITS as a service continuity from roads to metropolitan and urban areas benefiting from already established and well-defined standards. The goal will be to build on the pre-existing services and conditions in order to achieve a swift deployment of C-ITS and preparation for connectivity and automation not only across the national core and comprehensive network (already in process with C-Roads Portugal), but also progressing into the two metropolitan areas of Lisbon and Porto and towards other municipalities along the axis between these two cities.

Through Cooperative Streets, C-ITS services will implemented along 210 km of roads leading to urban nodes, ensuring a continuity of service along the core network and well into Lisboa and Porto municipalities. In total more than 500 RSU will be installed with more than 800 OBU and 800 vehicles in operation by the end of the action. Together with this, 17 cities will display multimodal travel information through the NAP. 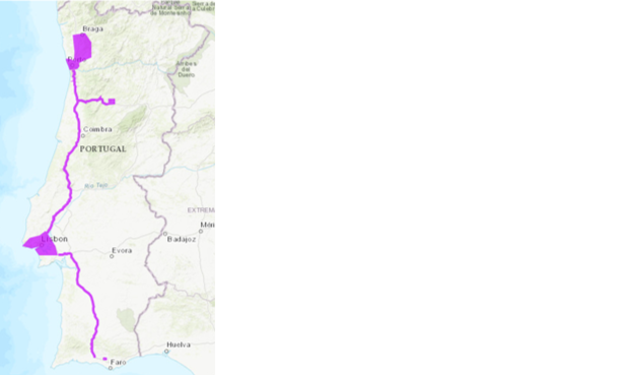