The A2M2 Connected Corridor, conceived in 2015, was located in the South-East of England on a 110km corridor from Greenwich in London to Dover. Implemented by four partner organisations: The Department for Transport (UK project lead), Transport for London (TfL), Highways England (HE) and Kent County Council (KCC), with technical support from consultants WSP and Capita, the route incorporated urban, inter-urban and rural roads that provided a variety of operational environments in which to develop, test and evaluate the UK’s pilot C-ITS services.

The UK focussed on the development, operation and evaluation of an interoperable C-ITS platform and the Road Work Warning (RWW), In Vehicle Signage (IVS), Probe Vehicle Data (PVD) and Green Light Optimised Speed Advice (GLOSA) services. The UK had no national data centre for real-time traffic systems data, so C-ITS service data from the UK highway authorities partners (TfL, HE and KCC) was integrated at a Unified Interchange Node (UIN) developed specifically for the InterCor project services. Each highway authority developed its own back-office traffic control systems and systems interfaces (APIs) to enable their systems data to be output and then received by the UIN. The UK’s high-level systems architecture was developed by the UK project team in discussion with other European project partners in InterCor, to ensure compatibility between the UK’s and the other member state’s systems. Security was implemented with manual certificates valid only for the duration of the chosen Testing Event, with the long-term UK preference being to implement its own ITS-G5 PKI service, contracted out to a PKI service provider.

The majority of the vehicle fleet used for evaluation were Kent County Council works vehicles that used the routes regularly and were called upon for randomised controlled testing as per the evaluation detailed methodology (Focussed Test Events). The UK partners and associates as well as European partners taking part in the InterCor TESTFESTs all contributed towards the testing and evaluation.

The pilot completed operations at the end of February 2020 with the results being published on the InterCor website (https://intercor-project.eu/library). The future of the pilot is uncertain, in part due to the impacts of COVID 19, but the UK is successfully utilising the learning from the A2M2/InterCor in developing its policy approach to the roll out and evaluation of connected vehicle services in the future.

The Services will be tested and demonstrated along the North Sea – Mediterranean TEN-T corridor in England, precisely the motorway-stretch from Dover to the Blackwell Tunnel near London.

The project coordinator is the UK Department for Transport; the daily management will be carried out by the Implementing bodies (Highways England, Transport for London & Kent County Council) as a joint test site Project Management Team.

The project’s schedule follows the usual path: use case definition, specification, development, validation, deployment. The UK’s pilot services were deployed in phases from October 2018 when a Hybrid Communications ‘TESTFEST’ was held. Full pilot operations commenced in March 2019 and completed at the end of February 2020.

The UK contribution to C-Roads needs to be seen in close cooperation with its work on InterCor, where its pilot was operational in March 2019 through to the end of February 2020. The continuing operation of the pilot will be decided in 2020. 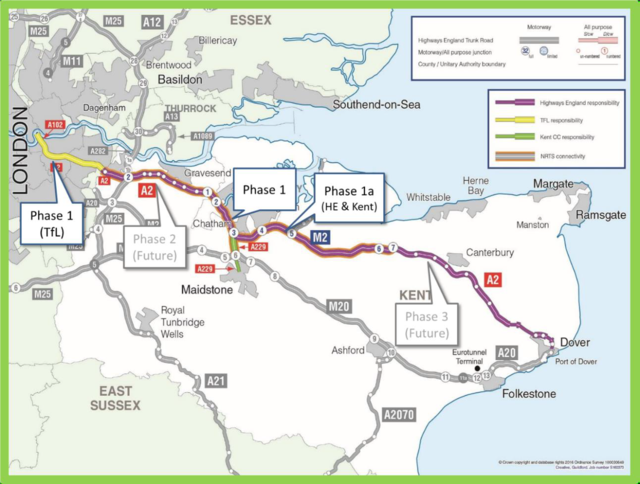 The pilotTest site is a part of the North Sea – Mediterranean TEN-T corridor in England, with the motorway-stretch from Dover to the Blackwell Tunnel.
back
Share this article under the hashtag #cRoadsPlatform