Only a few days after the European Parliament approved the Delegated Act on C-ITS, ASFINAG, Volkswagen, ANDATA, Swarco Futurit and other C-ITS pioneers have impressively demonstrated the practical implementation of this legislative act.

Under the motto "Car2X Communication: Paving the Way for Cooperative Road Safety", Europe’s ITS innovators gathered at the ÖAMTC site in Teesdorf near Vienna on 24 April 2019 in the presence of national and international research lead projects and test regions for connected and automated driving. The aim was to demonstrate selected C-ITS services out of the C-ROADS catalogue: Road works warning involving a road-safety trailer as well as hazardous location warnings dealing with a broken down vehicle and an approaching emergency vehicle. The infrastructure operators, vehicle manufacturers and technology companies involved in the demonstration were able to prove their expertise and the interoperability of their developed C-ITS products.

Road operator ASFINAG has already started its tender for C-ITS based on the provisions of the Delegated Act and C-ROADS. Both the Volkswagen C-ITS hardware, which is about to go into mass production and the C-ROADS reference vehicle from AustriaTech were able to receive and fully process the C-ITS messages sent out via WLAN / ITS-G5.

"We won't have to wait any longer. Until the end of 2019, first regions will be equipped with C-ITS roadside equipment and first vehicles equipped with WLAN-based C-ITS technology will roll off the assembly line. The benefits for customers will be visible early on, as positive effects on traffic safety are expected even with low equipment rates," says Bernd Datler, Managing Director of ASFINAG Maut Service GmbH.

Thomas Biehle, Head of Co-operative Safety at Volkswagen, adds: "Infrastructure and vehicles are ready to roll out C-ITS based on WLAN technology. The Delegated Act guarantees interoperability and backwards compatibility between all C-ITS services in Europe and creates the basis for establishing C-ITS as a further component of road safety". 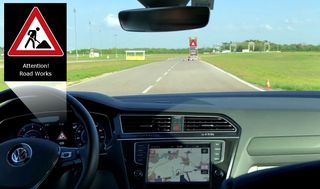