C-Roads at ITS Europe

C-Roads took a prominent spot at the ITS European Congress 2017 in Strasbourg with two dedicated sessions and the signing ceremony of the MoU between the C-Roads Platform and the CAR 2 CAR Communication Consortium. By this signature a reliable foundation has been established for comprehensive harmonisation and deployment of the Day-1-C-ITS-services. Going beyond mere standardisation, the C-Roads Platform will provide specifications which are the basis for public procurements in the field of C-ITS.

As Claire Depre of the European Commission mentioned in her opening statement of the first C-Roads session, the difficulties in crossing borders already become visible for regular travellers when being subject to passport control. This principle can be transferred to vehicles and C-ITS services that shall be coherent irrespectively of changing territories and infrastructure operators. For achieving coherence, she also pointed out the importance of connecting and coordinating the different stakeholders from infrastructure operators, car manufacturers and public authorities, especially in the early deployment stage.

The C-ITS strategy of the European Commission represents the common denominator of efforts: Besides defining and supporting common priorities, the avoidance of a fragmented market is a very important aspect. Any efforts should use a mix of communication technologies, address security and data protection issues and define clear rules for interoperability. In this matter, the work of the C-Roads Platform has yet proven to be successful since a shared view on coordination and cooperation task has been achieved. This already became clear in the first session on the ITS Europe opening day where road operators, car manufacturers, researchers as well as national and European authorities expressed their views on the converging of C-ITS throughout Europe.

Their statements unveiled open issues on the way to harmonised C-ITS deployment and in this sense also the expectations towards the C-Roads Platform. Serge van Dam from Rijkswaterstaat emphasised that changing technologies also require a change in processes, which represents a cause for hesitation from many sides. Due to the lack of proven technologies and standardisation, the first mover will have to face the risk of getting little advantage – at least in the short run – from taking the step forward. According to Karl-Oskar Proskawetz of CAR 2 CAR Communication Consortium, the particular difficulty in taking this step will be the need to “freeze” the status of development at a certain point in order to achieve standardisation. Agreeing on this point will thus be a critical path in C-ITS harmonisation and will be supported by refinements in legal framework development, a PKI infrastructure as well as interoperability testing and profiling.

The C-Roads Platform will contribute to this by issuing the first communication profiles in fall 2017 and thus encourage and facilitate progress in the development of a technical and legal framework in C-ITS. Efforts in coordination and harmonisation were underlined by the signature of a Memorandum of Understanding between C-Roads and the CAR 2 CAR Communication Consortium on the second day of the ITS Europe Congress. This MoU enables close cooperation between the automotive industry, road authorities, and road operators for preparing the deployment of initial cooperative ITS services across Europe by 2019. Both parties strongly support the recommendation developed by the European Commission’s C-ITS Deployment Platform to utilise short range communication in the 5.9 GHz frequency band. In accordance with the European C-ITS strategy (COM (2016) 766), the hybrid communication approach builds on combining short-range ITS-G5 and wide area cellular and broadcast communication under a complementary principle.

The next steps will include deciding on data formats and protocols, integrating back office processes and launching tendering procedures. Future use cases and services will go beyond mere individual transport and involve public transport as well. Political commitment was given by the European Commission with Claire Depre calling for coordinated stakeholder initiatives prior to the potentially protracted development of a legal framework. Against this background, C-Roads will not set up another pilot but establish real operation based on a sound set of specifications. A common vision was clearly visible throughout all the C-Roads presentations and sessions. The number of C-Roads members is soon to be increased, accompanied by strong commitment from associated Member States and even New Zealand and Australia will make use of the C-Roads specifications for cross-border harmonisation of C-ITS services. 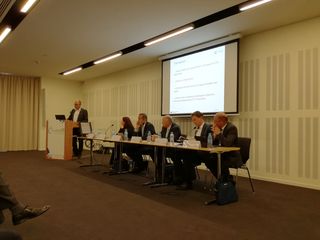