C-Roads at the Digital Transport Days in Tallinn

The C-Roads Platform made a strong appearance at the Digital Transport Days in Tallinn from 8 to 10 November 2017. Emphasising its prolific nature, the platform had its own stand in the exhibition zone and a closed session where eight new countries were welcomed to the C-Roads Platform. European Commissioner Violeta Bulc and INEA Director Dirk Beckers took the opportunity and joined the subsequent poster signing ceremony at the C-Roads stand.

The European harmonisation of C-ITS has been pushed significantly during the last days with the presence of C-Roads at the Digital Transport Days in Tallinn from 8 to 10 November 2017. With the introduction of eight new countries, the platform size has doubled thus holding solid strategic power for linking C-ITS deployment initiatives and developing common technical specifications.

After introducing themselves and their pilot areas in the closed C-Roads session, the new partners were officially welcomed in the Signature Ceremony for Digital CEF-T projects where a total of 38.5 million Euros of European funding was granted to the new C-Roads Platform members. This was followed by a poster signing session at the C-Roads stand where all platform members once more emphasised their willingness to harmonise C-ITS throughout the European Union. This signature process was also attended by European Commissioner Violeta Bulc and INEA Director Dirk Beckers who took the opportunity to witness another major step in paving the ground for making Cooperative, Connected and Automated Driving reality. 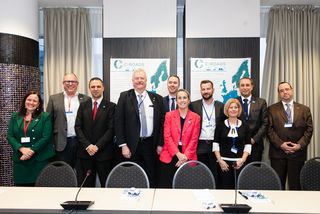