Another fruitful C-ITS cross test was conducted in Austria with a great number of participants. Worth mentioning are the C-Roads partners from Ireland, who participated in a cross test for the first time and a new partner from the industry: Hyundai.

The two-day event started on 19th October on the premises of the Austrian motorway operator ASFINAG in Inzersdorf, Vienna. There participants received, processed and interpreted DENMs and IVIMs sent out by a Road-Works-Warning (RWW) trailer and a Traffic Manager vehicle of ASFINAG. During the second part of the day, participants tested the reception of CAMs and IVIMs from RSUs implemented on the S1 motorway. Except for adjustments in the length and number of trace points that have to be made, both tests were very successful.

The route of the second test day led along the Vienna Ring. RSUs from Kapsch TrafficCom, Swarco and Yunex Traffic, which should send out SPAT/MAP messages, are distributed on the road at light-switched intersections. Testing these RSUs resulted in some findings. One station did not send a SPAT sequence. The SPAT/MAP messages with specific ID’s were according to standards, but not according to C-Roads specifications. A unified process for naming the intersections would improve the identification. A lower frequency of sending SPAT/MAP messages would help to improve processing and interpreting the messages. Another finding was that it would be beneficial if a minimum length of the entry lanes for MAP messages was defined. This would help to recognize the signal group and valid phase for the vehicle.

Overall, the C-Roads partners were very pleased that the event showed that a high level of cooperation between the C-Roads Platform and the industry could be achieved. Cooperation is a cornerstone of C-ITS technology, which was once again confirmed at this event. 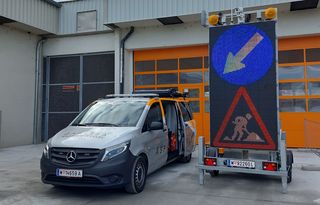