European C-ITS deployments are highly visible around the globe! This became once again aware, when in spring 2022 a Japanese Delegation visited C-Roads deployments across Europe. Representatives of the Japanese motorway operator NEXCO EAST together with representatives from ITS-TEA, Nippon KOEI and LEO met with C-Roads-Platform representatives at the ITS Europe Congress 2022 in Toulouse. Their European C-Roads tour continued to the cities of Bordeaux, Frankfurt, Brno and Vienna, where the Japanese delegation gained insights on the C-ITS services active both, along motorways as well as in urban environments.

A lively exchange of information took place, ranging from technical specifications to strategic and policy approaches on use-cases supporting both, administration and travellers, as well as on technical elements to implement C-ITS services interoperable and sustainable. The versatile possibilities of using C-ITS were discussed and demonstrated. The different partners of the C-Roads Platform presented various C-ITS services deployed for making the mobility system safer and more efficient by focusing on road traffic on motorways and intersections, public transport as well as on rescue services.

The C-Roads partners as well as the Japanese delegation were very pleased about the visit and the established relationship will be maintained in the future. 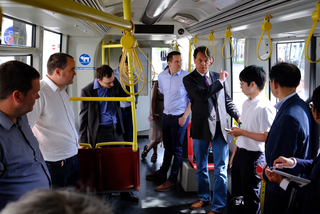