Ostrava has recently hosted a set of C-ITS tests on 11th November 2019. These tests were primarily focused on the verification of C-ITS services in the public transport environment. Representatives of the Ostrava Public Transport Company (DP Ostrava a.s.) had a chance to create any event defined by the standard via GUI of C-ITS back office. This event was then displayed on the test mobile application as the vehicle passed through the defined location. In addition, during the day there were successfully tested also C-ITS services, which are currently uniquely tested only in the Czech Republic, however, specifications of these services will be submitted to the C-Roads Platform Steering Committee in December 2019 for approval and inclusion to the next release of the international C-Roads specifications. The testing fully proved the functionality of the entire C-ITS system built within pilot area DT4 of C-Roads Czech Republic project. All scheduled test scenarios were successfully fulfilled. 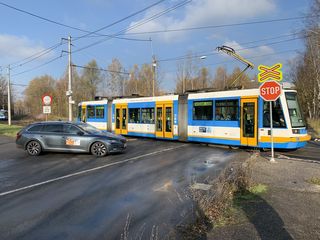