Austrian and Italian, Portuguese and Spanish C-Roads partners share fundamental principles of the C-Roads project such as international cooperation and C-ITS service harmonisation. This was confirmed by the end of 2021, when the Austrian and Italian as well as the Portuguese and Spanish C-Roads partners carried out the first physical cross-border tests within the C-Roads framework for hybrid C-ITS. Covid-19 has made it very challenging to conduct physical testing, which is essential to the continued progress of the C-Roads platform. Virtual tests between partners were necessary, and turned out to be very useful for C-ITS system developments. Still, physical tests are important to prove the interoperability of the C-Roads specifications under varying real traffic and road conditions in addition. Thus, the participating partners were very pleased to have finally executed successful physical tests in cooperation with their neighbouring countries.

One trial took place on the Austrian-Italian border [A22 (IT) /A13 (AT)] on the "Brenner Corridor”. Two different routes were selected as test routes. Route 1: Nößlach to Brenner and back, and a longer , Route 2: Nößlach to Sterzing and back. The goal was cross testing of C-Roads specifications and traffic events, communicated via ITS G5 and a long range telecom based data communication channels and both routes were run a total of three times, examining different test cases. All messages were error-free decoded and displayable for the test and validation tool without any problems. The tests were successful.

The Spanish-Portugese test was conducted on the border between Minho (PT) to Galicia (ES). The main goal was the physical verification of the interoperability between the two countries and the validation of vehicle equipment and security infrastructure. Different scenarios were executed in a short run of 30 minutes and one long run of 60 minutes. The conducted trial proved partial interoperability with security between national C-ITS networks. Spanish vehicles (OBUs) were able to receive information from Portuguese roadside units and Portuguese vehicles were able to get road safety messages from Spanish broadcasting units. These tests also proved to be successful. Minor service differences between the partners involved were addressed and further tests should take place in 2022 within the framework of C-Roads Portugal.

If physical testing remains feasible in the future, several C-Roads partners will conduct cross-border testing to further advance the development of C-ITS service roll out in Europe. 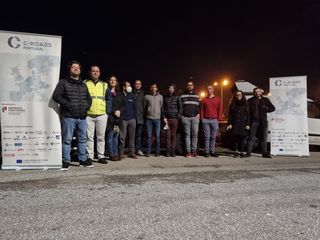